A note from our Representative

I first visited the Amami Islands of Japan on my trip to Amami-Oshima Island, in 2015. I found the islands fascinating.

I saw so many rare and unique fauna and flora on the Islands, such as mangroves and the Amani rabbit (Pentalagus furnessi), a unique species of rabbit found only on Amami-Oshima Island and Tokuno-Shima Island.
They have recently discovered a new fish specie, Amami-no-hoshizora-fugu (Torquigener albomaculosus). There may be many more discoveries waiting in the Amami Islands!!
Surprisingly, this amazing environment is located on the doorstep of areas inhabited by humans.

I also come across many cultural practices and craft industries while on Amami-Oshima Island. Each of Amami’s islands has its own Japanese dialect, classified as extinct languages by UNESCO. The islands are also filled with many unique festivals, songs, dances, food, and rum.

Sugar cane is the number one crop grown on the Islands, and the unrefined brown sugar made from it is full of various minerals and tastes delicious.
On top of this, the making of rum from the brown sugar is restricted to the Islands, by the Japanese Government. You can taste a wide variety of rum brands there, alongside many types of seafood.

Another must-see are the Islands’ singers, who sing songs written in dialect, using falsetto voices and accompanied by a samisen (three-stringed, Japanese, banjo-like instrument, plucked with a bamboo pick) and Chidinーsmall hand drum.

The songs and the dances are a perfect match and form an integral part of local island life. For example, one person sings songs and play the samisen, while another person beats the drum. Eventually, all the people dance to the music at night, during holidays and the festivals.

It’s well-known that the Islands are home to many surfing and scuba diving spots, and abound in coral reefs. The sea is emerald green, with turtles spawning on the beaches from April to October. Dolphins also inhabit the area and whales come to nurture their babies, from December to April, there.

These wondrous things about the Islands captured my mind and have never released it. So, I thought I would make a page dedicated to the Amami Islands on social media. However, there were already so many pages about them in Japanese.

So I looked up sites that talked about the Islands in English but came across only a few results.
As a result, I decided to write about the fascinating locations and traditions of the Amami Islands in English and in Spanish (which I also speak), creating a page called “Go Go Amami Islands” on Facebook.
Over time, the number of friends and supporters of my page has increased, both in and outside of the Islands.

A little bit more about us 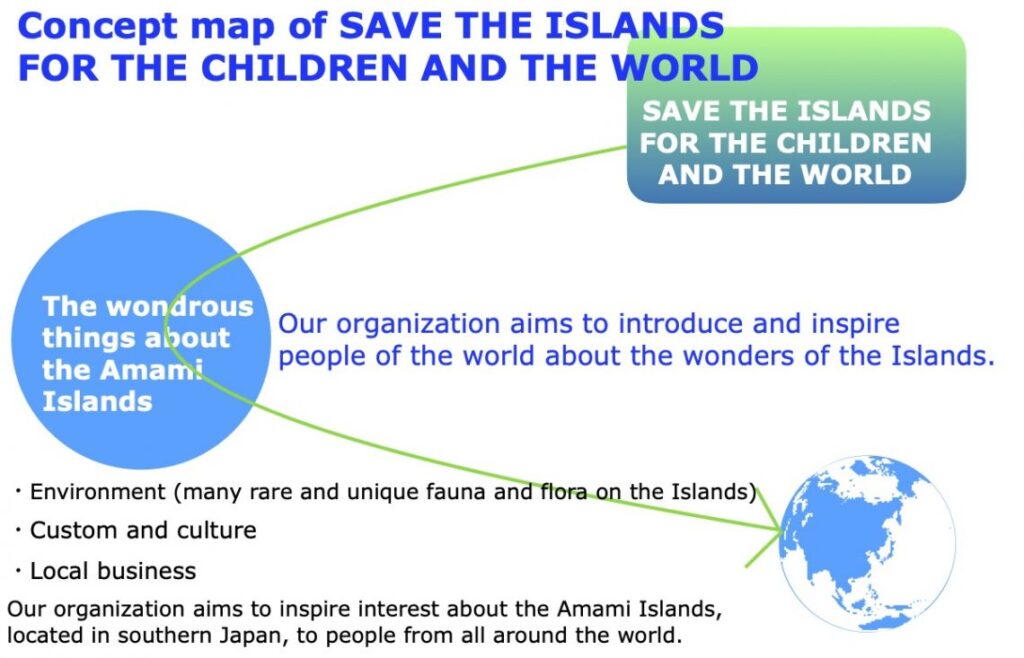 We focus on the natural environment, traditional culture and local industries of the Islands through the following activities:
･ Introducing these cultural artifacts to the world through simple language and recording them for the next generation.
･ Academically studying and investigating the unique and traditional subjects of the Islands, presenting our findings at academic conferences.
*The movie was shot on location in Sumiyo area, Amami-Oshima Island, Japan.

Save the islands for the children and the world is incorporated as one non-profit corporation under the laws of Tokyo, Japan, and has been recognized as a tax-exempt organization by the relevant Japanese tax authorities.